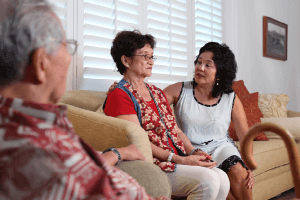 At some point we've all had times of forgetfulness or misplacing things. Our keys get lost or we draw a blank trying to remember where the car is parked or what we just ate for breakfast. We can usually sort it out and remember things with some time and patience. But when is forgetfulness or memory loss of concern?

Serious memory problems can be disabling and make it hard to accomplish routine tasks without help. This is different from the occasional forgetfulness that comes with aging. Memory loss that disrupts routines and activities of daily living is concerning, and caregivers should know it may signal a change in a person's condition. 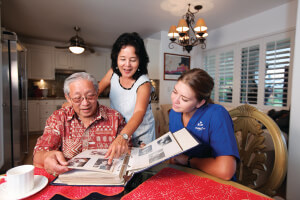 In home care, a question I often get is how to care for someone with Alzheimer’s who asks the same questions over and over again. To better understand and manage what’s going on, it helps to first know a bit on Alzheimer’s disease and dementia.
Alzheimer’s is a type of dementia that affects memory, thinking, and behavior. It’s a progressive disease, where brain cells deteriorate and eventually a person can’t make sense of the world. When short term memory is affected, it can lead to repetitive behaviors, like stating or asking about the same things over and over. In essence, your loved one can’t recall having already asked a question because of their memory loss. A person with Alzheimer’s may be unsure of what’s around them, where they are, the passage of time, or recognizing anyone. All together it’s very unsettling, and a source of discomfort for them. Understanding how they feel, or describing their own feelings and needs, can also be lost in a person with Alzheimer’s disease.

Technology is ever-advancing these days with information on new devices everywhere. For early adopters this is seen as helpful and even normal. However, for some seniors, adapting to new devices can be challenging due to physical limitations. Vision loss is one of the more common problems experienced, as is Age Related Macular Degeneration (AMD) that typically affects older adults. 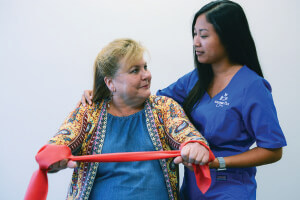 Throughout our youth, most of us will experience muscle growth up until the age of 30. Thereafter, we begin to lose some muscle mass, strength and performance. This steady decline is called sarcopenia and is the “use it or lose” part of the natural aging process. It often goes unnoticed in our earlier years, as we have more muscle than needed to perform everyday tasks like standing or getting out of bed. 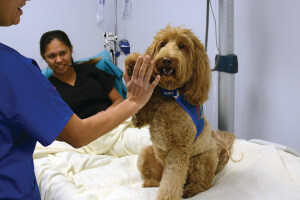 We have a gem with us. In 2017, we introduced her as Ruby, our furry four-legged  caregiver and therapy dog. Since then, we’ve received much interest about her and pet therapy, aka, Animal Assisted Therapy.